Franz Kafka is my copilot

What good is a family that cannot come together in crisis? Is there any emotional profit from believing in an eternity spent with anyone who refuses to change, and cannot open up their heart and mind to unconditional love and personal growth? If we carry with us into the next life our personalities, thoughts, knowledge, and attitudes, is there any real chance at reaching this blissful and eternal happiness to which we lay claim? As we sit on our respective pews each Sunday, fighting to stay awake during the less than inspiring discourses, each one filled with more cliche and misguided opinions than the last, does any one of us feel like jumping up and shouting a joyful Hallelujah? In our greatest moments of spiritual survival, as we ride roughshod over the blackened remains of temptation, fear, and filth, do we look back to check for innocents in the wake of our self-righteous destruction? Do we listen for the sound of hearts beating in the chests of our supposed enemies, the ones we face each day when we walk out the front doors of our hallowed homes and into the dark and dreary world? Are we truly surrounded by evil on all sides, tempted by those we work with, and threatened by the choices made by people we dare not interact with? Do we, the self-appointed mighty live in such fear?

Rewind my clock. Take me back to March 24th, 2009. I felt differently about so much, including all of the above. But it has been a year out of Kafka, and I have undergone a metamorphosis. Still, after so much change I remain flawed, but I revel in it because to be flawed means that there is the possibility of change still living within me. To stop changing would be death, though not in the physical sense, because to shed this life is in itself just a gateway to more change. No, to stop changing would be an emotional, spiritual death, and I fear that more than anything else. To end the passionate tide that ebbs and flows within me would put an end who I am, and I am starting to like who I am.


I am not yet close to figuring it out, and so a daily choice is mine for the making; move ahead and be, or stop where I am and end.


I am so damn tired tonight; I wonder what I will choose tomorrow?
Posted by Matthew Deane No comments:

Last night we drove away again. We didn't know where we were headed; we didn't care. The kids were grown, living happy lives of their own. Our work as parents was far from done, but it was time to spend some time alone. No packing, no toothbrushes, no stopping the mail. On a mutual dare we climbed into the car, opened the moon roof, and turned up the music. Come the dawn we were miles from anyone and anywhere we ever knew. I felt lighter inside, like the morning after our first date. Our only commitment to each other, the only decisions to make being left, right, or straight. No fears, no doubts, no nightmares, just the possibilities of the open road. Not knowing the end of the journey, forgetting the beginning, and thrilling at the in between.
Maybe tonight we'll go see the world's largest ball of twine.
Posted by Matthew Deane No comments:

When all is said and done for the night, I close my eyes and listen to the dialogue of a British television show entitled "The Smoking Room" playing through an earbud jammed into one ear. The premise is this; several employees of some nameless company pass time in a designated smoking room. While most enter to "have a fag," others are merely there to socialize and idle away their break time. The camera never leaves the room, so all of the action and dialogue take place amid the grey haze of cigarette smoke. I don't smoke, but I do love this show because it is well written and the characters are flesh and bone. They have flaws and fears and dreams, and while not one of them is always likable, they are all empathetic and tangible.

During the week that Jared was missing. I would lay awake with worry each night, unable to sleep as my mind raced with dread, regret, pain, and hope. Of course, the day came that we found Jared dead in the woods, and in that moment dread, regret, and pain ganged up and beat the shit out of hope, giving him a bloody nose and broken teeth. I couldn't sleep, and each night experienced the panic of rapid pacing inside my own head. A couple of sleepless nights later I found myself on the couch, wide awake and out of my mind with grief. I turned on the PS3 and streamed "The Smoking Room," which I had downloaded before so much of my life turned to hell. For the first time in days, a quiet fell about me. I closed my eyes and listened to the dialogue, and it seemed as though a small crowd of new friends had formed in my living room, chatting away as I took a nap on the couch. I fell asleep just a few minutes into the first episode, but when it ended my eyes popped open as if set to a timer. I reached for the remote and started the next episode, and the same thing happened. I made my way through most of that night in this manner; grabbing twenty minutes of sleep at a time while my new pals from across the pond discussed the minutia of life, huffing and puffing away as they did.

As I said earlier, I am not a smoker. Jared was, and I can remember a conversation we had about "cigs," as he called them. He was trying to cut back, because he said that the first puff on a cigarette after not having smoked one in a while was like an orgasm, a rushing sensation through the body and blood. I pointed out that with few exceptions, having repeated orgasms would not kill you, and would certainly not cause lung cancer or emphysema. I did, however, admit to a certain degree of curiosity regarding smoking, but acceptance of my addictive personality and the fact that I was too much of a coward kept me at bay.

I miss Jared, and part of missing him is missing the way he smelled, which for me was a blend of cigarettes, cologne, and warm skin. One night last summer, Elizabeth and I stood together in our closet and buried our faces in one of his favorite tee-shirts. We cried because we missed him, but then laughed because he would get such a kick out of our foolishness as we sniffed so frantically at his memory. It is hard to describe the emotions dredged up when I catch a hint of his scent on a passing stranger, it is like a mix of anxiety, grief, and happiness.

So, returning to my nightly lullaby; I am not sure how long this will go on, but for now it works. I can fall asleep at night, albeit it very late, with my mind free from racing against itself, and let the dreams about Jared wash over me, as they do every night.

Hey, it beats the hell out of drifting off to sleep with a lit cigarette dangling from my lips or fingers.
Posted by Matthew Deane No comments:

Tribute to a Llama Rancher 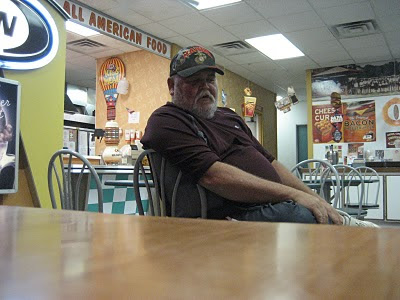 This afternoon I was down at the police station, sitting in a cruiser. Above my head, in a ceiling rack, was an automatic rifle. It looked just like the one I carry while playing a certain game on the Xbox. The laptop I was working on took some time to reboot, so I spent my time checking out the buttons, switches, and equipment used to fight crime. The chief was on his phone, just a few feet away, so it was impossible to ignore the words that came; suicide, rifle, mess, nothing left, these words made their way into the air around him with the same ease that words like hard drive, update, software, and network make their way into the air around me. I felt a sudden sweat position itself in a fine layer over my skin, and a pain stabbed at my stomach. I willed the laptop on, begging it to find hidden speed in its aging processor so I could verify the updates to the database that kept the mean streets of New Hampshire safe and get away from that phone call. Instead, more words; scholarship, full-ride, honors, alcohol, drugs, pressure, parents, denial...they all gathered in my ears and pried their way into my head, forming a hot ball inside my skull. It was hard to breath softly and my eyes blurred, the tears making their daily appearance at an inopportune moment the way they always do. I wiped them away on my sleeve, and forced myself into the distractions of work. I carried on.
After a few more agonizing minutes, the chief hung up with a sigh. He told me he had to run and asked me to lock up the station as I left. Within a minute I was alone, staring through the windshield at the fire trucks, ambulance, and vending machine in the quiet garage full of shadows that I hadn't noticed before. Bad words from the chief's one-sided phone call bounced around inside of me. The tears came on again, and I let them run their course this time, my work on the database finished. I sat back in the driver's seat and put my hands over my head, resting them on the weapon above. It felt nothing like the gun that I carry while playing a certain game on the Xbox; it felt cold, hard, and lethal.
Posted by Matthew Deane No comments: