Bladder Control Is So Overrated

My bladder is about as deep as a stripper's whisper; it makes so many promises and holds not a one. The other night, however, she made good for me by filling up quickly. I am sitting in the second row, dead center. To my left are several young men wearing wife beaters and sporting less intelligence than a pile of blankets. To their left, at the end of the row, sits a baby momma, with the baby of head wife beater in tow. The kid isn't a day over twelve months, and spends his movie time sucking away at something that I not about to verify as being just a bottle. To my right, good friends, the ones that invited me out to endure the plotless ninety minutes that some poor fool has been conned into funding as a film project. To be fair, it isn't all bad, and there have been some rather hilarious moments, but not enough to sustain my interest to the point of bladder rupture. If a movie can compete with my tiny bladder for screen time, it is a movie worth recommending to others. This movie shall forever remain nameless.
The real reason for our outing to the theater is not the movie, but rather the BUC. We had not seen the Black Urban Cowboy (see earlier posting) for some time, and were hankering for a glimpse of the legend. We predicted a 9:40 showing of "Predators" to be his selection for the night, since it was opening weekend and he would be counting on fewer people that time of night on a Sunday. No luck; as we entered the building we saw no cowboy hat, and heard no jingle of spurs.
So here I am, eighty minutes into this theatrical marvel, and my bladder is sweating. I imagine the toxins from my pee seeping into my chest cavity, infecting my body and setting up a major case of sepsis and death. I am trapped, however, by the long stretch of beaters to my left, and polite movie goers to my right. At last I make a choice, and stand as the plot heaves its final breath. I manage to exit the row without kicking anyone in the legs, or bumping their face with my butt.
I turn the corner to head up the ramp and down the hall to the restroom, and come to a full stop. There he is; the BUC. He stands alone in the large corridor, backlit by the bright lights of the movie poster boxes hanging on the wall. His hat is white and crumpled atop his head, his suit is dark and loose, and his boots are adorned with the spurs that make him who he is. I am in the presence of a ghost, I can feel it, and were he to levitate past me down the ramp, I would not give it a second thought. With the speed of a gunfighter I slide my hand into my front pocket and back out again, phone in hand. As I walk silently behind him, I shoot, digitally capturing the moment. I am tempted to speak, but my bladder, the very thing that brought me to this moment, is now demanding repayment of the favor.
When I exit the bathroom, he is gone. The hall is empty, as is the massive courtyard and ticket area. He has vanished, perhaps passing through the walls, a fine western mist that now mixes with the light rain outside.
Tell Jared I said hello, would you please, Mr. BUC? 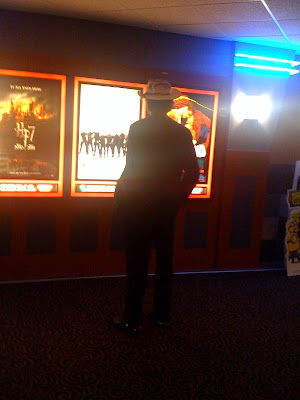