Photos From The Edge Of My Phone 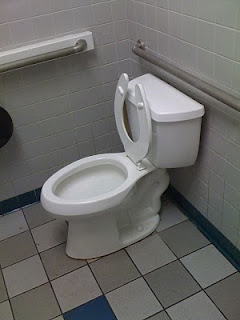 I take photos of bathrooms. Here's one in a gas station near Newburyport, MA. 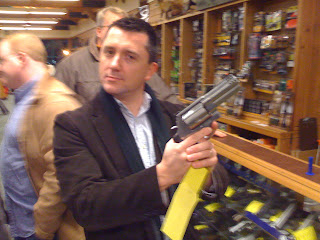 Shopping for the zombie apocalypse. 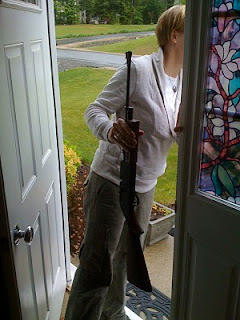 So hot. Nothing like your woman holding a weapon and shouting at varmints. 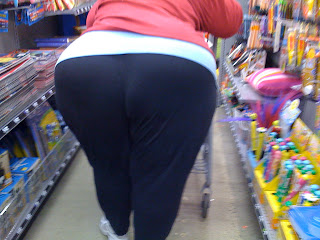 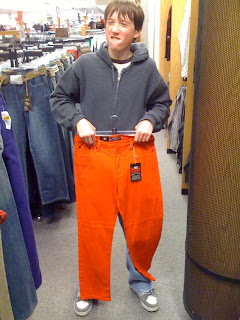 Shopping with Caleb is always lined with laughter. 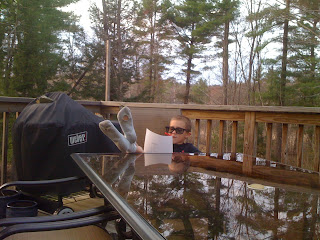 Solomon studying his spelling list for school. Notice how the hole in the sock does not detract from the coolness this kid exudes. 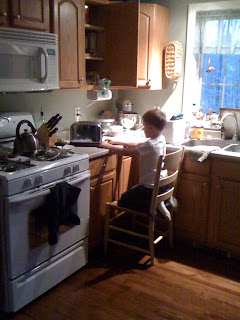 Solomon waiting for the toast. 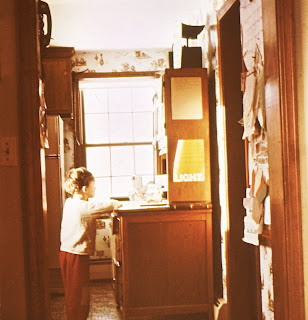 This was me waiting for the toast 35 years ago. 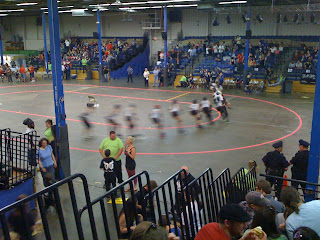 Roller derby. Everyone should go to at least one bout. 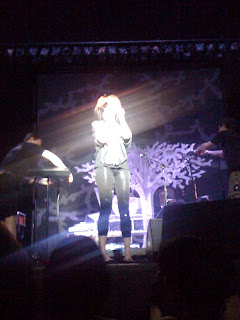 Imogen Heap in Boston at the sweaty theater. Girl got mad skills. 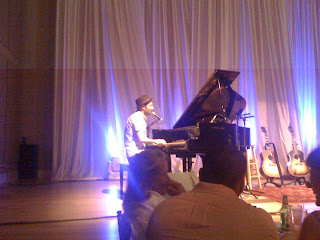 Mat Kearney up in Maine. Boy got mad skills. 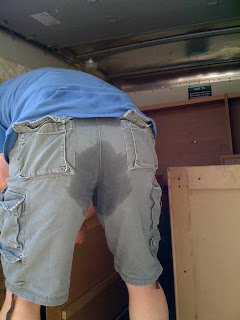 Moving my brother David up to Dover on the hottest day in recent history. Somebody get my ass a towel! 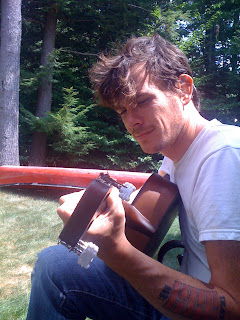 My brother Michael playing guitar in my yard. Boy got mad skills. 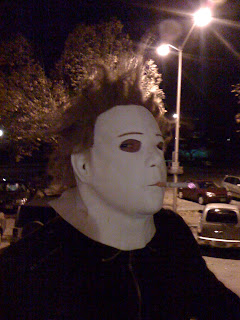 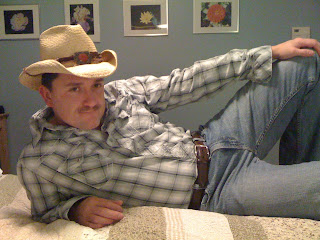 How's about a poke? Check out the 'tache and the tight 80's jeans! Sexy smokin' hot! 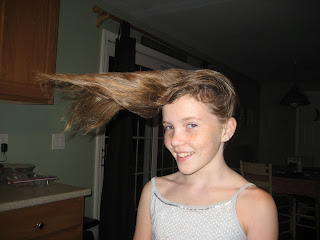 Only uncle Michael can do Hannah's hair the way she likes it.
Posted by Matthew Deane No comments:

Hello Good People, It's Me. Are You Out There?

I wanted to chemically alter my state of being. I bought the kids a trampoline instead.

As we were setting it up, a hornet stung my left arm. Right on the muscle. I swiped at the pain, and the nasty little bugger leapt from my arm to my hand, stinging me again. The sting on my knuckle began to throb in time with the one on my arm.

I do not like being stung once, let alone twice. Elizabeth was there for me, sweet salve and soft bandages at the ready. My hand began to swell and a lump formed on the underside of my arm. I am not allergic, and the pain would have subsided without her attentions. But who doesn't like some love and kindness when they are stung?

Later, while once again assembling the trampoline, I picked up a bolt. There was a sharp metal sliver clinging to the head. It pierced my thumb. Blood dripped down onto page three of the trampoline assembly instructions that I had placed on the ground between my knees.

I thought about that bolt later, while underwater in the tub (yeah, I tub). That metal splinter had been hanging on to that bolt since the machining process. It made it through the cold forging, the inspection, the packaging, the shipping, and the storage phase of that bolt's journey. It waited in that plastic bag, deep inside the giant box that held the trampoline destined to be ours. How long it had to wait to cut me I do not know, but I bet it was a long time.

For many years I could not understand why Jared would get so angry at God when a plane crashed, killing happy, traveling people. I remember his rage at the news about a little boy from Cambridge, MA that had gone missing. The boy's body was discovered some time later, in a weighted rubbermaid bin at the bottom of a pond near Jared's house. Jared lived up in Maine at the time, a long haul from the boy's neighborhood. My little brother was visibly shaken when he described to me the wellspring of emotions that roiled inside his heart and mind during his daily drives over that bridge. A happy, innocent, undamaged boy had been discarded like trash after being tortured, raped, and murdered. To know that as he drove over that bridge ate at away at Jared's loving heart. He was angry at God for letting it happen. I tried to explain that God didn't let it happen, but that he loved the little boy. I told him that the men responsible were just bad people, and that they would pay someday.

It didn't soften Jared's anger. He couldn't fathom a loving Father in Heaven that would allow men that would do that to a boy come to earth to live. I couldn't either, but I held the party line, stating that the devil was at work in the world and that some men were just plain evil. I had heard grown men that I respected say it, and it felt like a reasonable explanation at the time. Jared didn't agree. I was uncomfortable with his bitterness towards heaven, and blind to the foundation of his rage.

I myself am not bitter towards heaven, but I am beginning to understand Jared's bitterness. We grew up together in the same house, in the same church. We sat near each other in Sunday School, listened to the same sermons and teachers, and of course, the same parents. While I was infatuated with every older girl I met, Jared was confused about his feelings for our father's male friends. I felt guilty for some of the things I did which were "bad," but the impulses that I gave into were categorized as "the natural man,"and so I at least had a fighting chance. Jared's impulses were, on the other hand, categorized as "unnatural," and so he was a living affront to God and his plan for man. Jared could not understand the motivations of a "loving" God that had sent him to earth as a homosexual, while commanding him not to be one at the same time. Add to that life-long challenge the insensitive, unforgiving nature of religious zealots and the rejection of family members. The odds against a happy life go from bad to incalculable.

I cannot recall ever having heard that the world would be better off without my "kind" of people, and that we should all be gathered together onto an island and nuked. To have heard that must have made Jared's heart weaken, and his blood to lay still and cold in his veins. If being gay is unnatural, then what is it to be so hateful and cruel? Seems unnatural to me, maybe anyone who thinks that way should be gathered together on an island...

What does all this mean? The hell if I know, I freely admit to wandering in mind, body, and spirit for some time now. It does feel good to express myself though, no matter how few people hear me. Or how even fewer of those that hear me will understand me.

The other day we went into the elementary school for a parent-teacher conference with Solomon's teacher. She said something that split a crack right down the middle of my grey, letting a burst of happy sunlight shine through. She confessed to having told the kids in her class that she didn't care how long it took them to read or write well. She only cared that they become good people.

I think the world would be better off with more people like that. Let's gather them all together on an island, so I can go live there.
Posted by Matthew Deane No comments: