Will The Gay Giraffes Go To Hell? 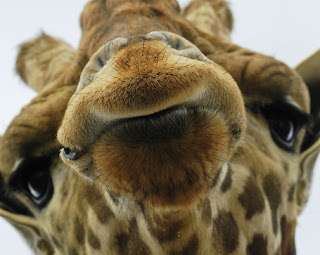 Giraffes have always fascinated me. Their long necks and dark tongues, along with the fact that they remain for the most part mute would qualify them as excellent candidates for family members. Their heads up in the clouds, they munch on leaves that few other animals can reach while little birds perch on their backs and search their skin for ticks to eat.

I have recently given giraffes some thought while driving from one appointment to another, and these are some of the things that occurred to me regarding the tallest animal on earth.

I am confident that given the chance, giraffes could really get into yoga. Their long necks and legs would flex and bend with such grace into all of the poses that yoga offers. Happy Baby and Frog would be the ones I'd most like to see a giraffe attempt, as well as the entire Warrior series. My only concern would be the uncontrollable farting. It always seems to befall me whenever I practice yoga, so it stands to reason that it would befall giraffes as well.

I also think that giraffes would make great therapists. As I mentioned earlier, they are for the most part mute, which could make them good listeners. Being so very tall, they are very aware of everything going on around them. Their early warning system might easily be converted to watch for the onset of all sorts of mental and emotional afflictions. They also look down on the rest of the animal kingdom, and I am sure that more than one human therapist does the same with their patients. My last therapist kept calling me by my brother's name. What would Freud say about that?

Regardless of their height advantage, I don't think that giraffes would be very good at basketball. I doubt they could dribble without losing control of the ball due to the cloven shape of their feet. They can also kick the head off a lion, so their passes would be far to dangerous to catch. On a side note, last week I had the great pleasure of going to a Celtic's game. Even from the nosebleed seats, Shaq looked like a giraffe that swallowed a family of hippos. The man is very large.

I do think that giraffes would make great friends. They seem calm and patient, and not all that demanding. Since they can kick the head off a lion and run thirty miles per hour, they would be good to have on your side in a fight. If something was out of reach, they could grasp it for you and bring it down to your level. I once saw a video of tick birds eating the flesh right out of huge open sores on the skin of a living giraffe. It reminded me that relationships can be draining at times, and it is easy to be taken advantage of. I would never eat the flesh of a living giraffe friend. That would be too rude, as well as disgusting.

In documented studies, it has been shown that male giraffes tend to "neck" with each other, and this behavior often leads to them mounting each other to completion. Indeed, 50% of all male giraffes are bisexual in their behavior. Only about 1% of female giraffes participate in similar behavior with those of their same sex, leading me to believe that very few lady giraffes ever lived in a sorority, and that most male giraffes will probably go to hell, if so very many of the world's religions have their say.