Cold rain, persistent wind, a beautiful woman, and an ugly running jacket. It was the morning of my first (and only) marathon. An uneasy night had left me without much sleep, and a summer of slacking left me without the training that I had promised myself to follow through with. Still, I wasn't as nervous as I should have been. Not since making known to friends that this race was to be run for Jared.

Elizabeth had been out shopping the day before, and had bought me a tiny little shoe pouch with a velcro strap. In it I placed the most powerful weapon in my energy arsenal. A teaspoon of Jared's ashes. My little brother would accompany on my run from hate. 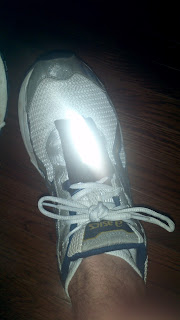 After a sweet kiss from my sexy driver, I made my way into the crowd behind the starting line. I felt surrounded by expert runners. Skinny people looking confident and collected, as if they ran marathons for a living. Unhealthy BMI's, belts loaded with energy goo and water bottles, running shorts, tight leggings, and shoes that I've only seen while watching the Olympics abounded. I wore my old Asics, a pair of Hanes underwear coated with a handful of Anti-Monkey Butt Powder, workout shorts, and a white tee shirt. My daughter Hannah (12) had painted a message on the back of my shirt. It read (in an array of colors), "Pledge Love! Run Away From Hate!" On the front pocket I had drawn four slashes to match the little tattoo on my right shoulder. My brother, Elizabeth, and I went together to get them after Jared's death. He was the fourth child in a lineup of seven. Mom had always marked our clothes with Roman numerals according to the order of our births, in order to properly disperse the clean clothes on laundry day. Since Jared wore a lot of my hand-me-downs, he didn't get the traditional IV so that she could just add a fourth slash when they became his. 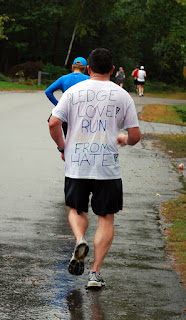 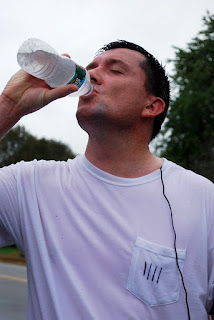 The race began with a starting gun shot by a soldier on leave from Iraq, which got the crowd pumped up with pride and appreciation. I stripped the jacket after the first mile. It was keeping me dry (sort of) but it was too hot to wear and way too ugly to keep. The rain did not let up, and the roads were riddled with puddles. It was impossible to keep my shoes dry, something that would plague me later on.
My Ipod was strapped to my arm, and without it the race would have been that much more difficult. I know that a true blooded macho runner scoffs at headphones, just as they do at treadmills, but I did mention that this was my only marathon, right? Anyway, I had chosen well my playlist, shuffling songs that were not too pumped up, yet not too mellow. I knew the words to them all and mouthed them as I ran, my hands occasionally waving to the beat just to keep it real.
The spectators were incredible. Supportive, encouraging, and entertaining, they held signs, rattled bells, and offered water to the runners. There were entire families, the children holding up cups and high fives. The best sign of the run was one that said "Chuck Norris Never Ran A Marathon!"
Mile 12 was tough. I had been running along, wrapped in a cocoon of runners at a 9:35 per mile pace. A sense of camaraderie had developed. I could do this! Then came the turn. Marathon runners to the right, half-marathon runners to the left (and the finish line just a couple of miles ahead). I followed the yellow cones alone, and found myself staring up an empty street. My heart broke. I felt abandoned. In an instant doubt crept into my mind, and I felt the raw grating of a blister forming on my left foot. My pace slowed. I wondered if I had over-reached, and for a moment considered turning around and running to the finish line as a halfer.
Then I looked down at my right shoe. I began to cry. I thought about Jared's final message to us. "I am so lonely. I have to go." I repented. I was not alone. Jared was with me, and I had to go. I had to go 26.2 miles. In a half shout I asked my little brother to help me. I told him that I missed him. And I ran.
A few miles later I saw a beautiful sight. Elizabeth and a dear friend were sitting out in the rain waiting for me. I paused for a kiss (from Elizabeth) and a water bottle (from my friend). When I started running again, my right knee burned with pain. I hobbled along for several hundred yards before my muscles heated up again and I resumed my pace, although not without some pain.
I cold sum up the next ten miles in two words; "Pain Conquered" but I won't. Blisters forming inside of wet shoes. Knees that refused to loosen up. Hallucinations. Every time I ran a hand through my wet hair, I grew light headed and felt as if I were sitting in a dentist's chair, my lungs filled with laughing gas. My pace slowed and I began to bargain with myself on walking versus running (if you could have called it running). Each time this happened, I looked down at my little brother and kept going. Elizabeth appeared at one point for a photo and a kiss. I love her.
Mile 23. Elizabeth and a final burst of love and energy before the finish. She snapped a photo, gave me some water, took my Ipod, and kissed me again. Her kisses at each stop were long and soft, and restored my strength.
For the next two miles I spent more time looking at my right shoe than I did at the road. Skeptics be damned, but at one point I swear Jared was there in corporeal form. Handsome as ever, but bare-chested, wearing shorts, and burning down the wet road beside me on his roller blades. His smile kicked my butt and pumped adrenaline into my legs. It doesn't matter if he wasn't truly there, because even as an emotion and fatigue induced hallucination, my little brother was motivation. I was going to finish.
And I did.
Pledge Love!
Run Away From Hate!
I love you Jared. See you on the flipside.
Posted by Matthew Deane