Mr. Tights Is Not A Frog

Call me Mr. Tights, all of my son's classmates do.

When I was in first grade, my mother made me wear white tights to school. Being a boy, I didn't want to wear tights, especially my older sister's hand-me-downs. One night I protested a little too much, and my mother sent me to bed with a warning that I would feel differently come the morning. I woke up the next day with a green dot on my ankle, the result of my mother having "cast a spell" on me as I slept. She told me that if I refused to wear the tights, the dot would spread over my body and I would become a frog.

I wore the damn tights.

It's a funny story (now), and I am using it and other childhood stories as the inspiration for a book that I am writing for 10-11 year olds. The book will be about a red-eared boy named Randolph, and while inspired by on my own childhood, there will be a measure of creative license included. I read the first chapter (about the frog that never was) to my son's fourth grade class a couple of weeks ago. To my great joy, they loved every word of it.

And immediately took to calling me Mr. Tights.

Which brings me to this morning. I spent it at the elementary school, assisting with the third and fourth grade Field Day. I decided to wear my kilt, because we live at 6500 feet, and so I think that Field Day can be looked on as a sort of Scottish Highland Games.

The kids had more than a few questions about why I was wearing a skirt, but they forgot all about it as soon as the events began. We had a great time out in the sun, playing a number of games and eating freezer pops.

After the games, we headed inside. Along the way, a bunch of the kids stopped in the hall to sip from the water fountain. They lined up, and I stood by to wait for them. One of the girls stood in line beside her father, who had also come to help with Field Day. She pointed at me.

"He wore tights when he was a boy. He told us a funny story about it," she said.

Another student chimed in, "Not just tights, but his sister's hand-me-down tights."

I stood there in my kilt, feeling my ears grow a little red.

"His mother did some weird things to him when he was a kid," added a third student.

"That's why we call him Mr. Tights," the girl concluded.

I smiled and said, "You tell these kids one little story about your childhood..."

Her father laughed politely. He looked as uncomfortable as I had in first grade, wearing my sister's tights. Had he been offered a hole to jump into, he probably would have taken it.

I looked at the kids and asked, why didn't you call me Mr. Frog?"

One of them laughed and said, "You didn't turn into a frog, because you wore the tights!"

Their sips of water finished and the point taken, we walked back to the classroom.

I think I'm going to like being called Mr. Tights.
Posted by Matthew Deane No comments:

When I published West Of Independence, I did not expect a never-ending stream of five-star reviews. The topics of homosexuality, suicide, and family relationships are white-hot emotional launch buttons when dealt with individually, and my story blends them all together.


An interesting two-star review of West Of Independence was posted on Amazon today. I am not sure what the reader wanted, but it sounds like they were expecting a manual with all the answers, a black and white map detailing the motives and emotions of every character, followed by sweet redemption for all involved.


But I am a writer, not an explorer or a cartographer; I couldn't draw a map of my own bedroom, let alone a map of the human heart (mine or anyone else's). I don't think it was my duty to tell my readers what to take from the story; this is neither a textbook or an operations manual.


I will say this: the suicide of a loved one brings everyone involved to their knees, and leaves them with more questions than answers, more guilt than redemption, and more turbulence than peace. Jared has been dead for almost four years, and just yesterday I stood in the garden center of Home Depot amidst a rush of people, with a bag of fertilizer in my cart, tears falling down my cheeks, and panic in my chest. These moments come and go in waves, without any sort of forecast or pattern to provide warning.


I didn't write West Of Independence to explain, absolve, empathize, or lay blame, and I certainly didn't intend to answer any questions (especially since I don't have the answers). I wrote it to tell the story as it happened (from my point of view), so that others might learn from it and spare themselves the same experience. Judging from the feedback that has been flowing in over the past month, that just might happen for some. People of all ages and circumstances have reached out with their own stories, their own challenges, and to share with me their own change of heart upon reading West Of Independence. To hear them share their feelings is thrilling; not just because my writing has had an impact on their lives, but because I have learned that the more we share of ourselves, the more able and willing we become to bear one another's burdens and sometimes even help to remove them altogether.
And so I don't mind that someone sees the book as too ambitious, or feels that it falls short of the mark that they have chosen for it. I had a mark in mind when I wrote it, and it wasn't to become an overnight literary success and a standard for writers in general. It was to help at least one person, and yes, that one person was me.

Anyone else was to be a bonus.
Posted by Matthew Deane 2 comments:

Email ThisBlogThis!Share to TwitterShare to FacebookShare to Pinterest
Labels: West Of Independence, Writing

I installed our new dishwasher on Saturday morning. It came in a large brown cardboard box. As any parent will have already guessed, the box ended up in the hands of my youngest son. He and his friend carried it outside, where it became a fort, a space ship, a boat, or some other imaginary means of playtime conveyance.

I did the same as a child. Our family moved a number of times, and cardboard boxes were a common occurrence in our home. My siblings and I would carry blankets and pillows,  home-baked cookies and cold drinks, action figures and comic books out to our cardboard sanctuaries and spend hot summer afternoons in the cool shade they provided. After several days the cardboard walls grew tired of our clumsy attention, and they would begin to sag and threaten to collapse. If there was a hill with any measure of incline nearby, we might take turns rolling down it while inside the dying cardboard box. We would thrash about, thumping around and around and laughing ourselves dizzy until the box tore open and lay flat on the ground like a tired father playing dead on the living room carpet after several minutes of happy wrestling with his kids.

Today the delivery man came with two brown cardboard boxes. They are too small to be forts, too shallow to curl up into with a blanket, and I wouldn't dare roll down the tiniest of hills while trying to fit inside them. Still, they carry just as much potential for joy as those large brown carboard boxes of childhood did.

But I remember that along with the many hours of fun that there were to be had with those large brown cardboard boxes of childhood, there sometimes came pain as well. A bump and a bruise while rolling down a hill, or the cut and sting that came from running a finger too quickly along the edge of the lid; these were part of the deal, but we knew and accepted the risks.

The boxes that came today were full of books. Many copies of a particular book. A book that I wrote, called West Of Independence. To complete the book and to publish it has brought me great joy; I have for some time now wished to become a writer, and to realize that dream brings about a feeling unlike any other. 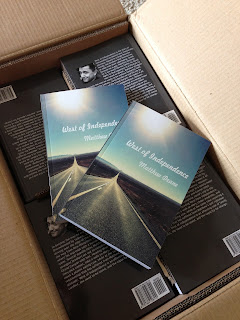 Along with the happiness of finishing the book came some cuts and bruises. While proud of the book, I am not proud of who I was for most of the story told within it.

But I have heard from a great many readers that are changing who they are because of who I was, and this brings a bittersweet joy to my heart. To make a difference, no matter how small, is the least that I can do, and to receive such messages makes me want to share my former self with anyone who will listen.

After installing the dishwasher, I drove out to Park City and bought a freezer for the garage. I told my wife that we needed more room for ice cream, frozen vegetables, and chicken breasts.

Don't anyone tell her, but the truth is that I just wanted another large brown cardboard box.

West Of Independence is now available in the iTunes bookstore! 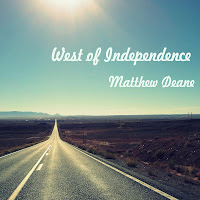