Twenty-two years ago I stepped inside a classroom at a university that I hadn't had the intention of attending. Shy, insecure, and uncertain as to who I was or wanted to be, I was counting the days until I had enough cash saved to disappear back to South America. Experience had taught me that foreign languages and cultures served to bridge social gaps for me; they hid insecurities and squelched inhibitions that had plagued me since childhood. I had been more comfortable in South America than I ever had in the States, a comfort that was drawing me back there. Besides, I felt pre-destined to marry a dark-haired, dark-eyed beauty, something of which there was no shortage below the equator.

There I sat in class, mourning my latitude, when in walked a young blonde coed. She was happy, she was confident, and she was late; I hated her before her butt was hidden from my view. I was at once convinced that she had been sent by God to mock me.

I didn't spend a lot of time in that class, but when I did attend she wasn't there. We passed each other a couple of times on campus, and each time she was too busy with being popular to pay me any attention, while I did my best to look straight ahead, indifferent to her cheerleader good looks and ill-deserved social status. I was angry at her without even knowing her name, because for me she represented everything wrong with high school, everything I was hoping to leave behind come the end of summer.

The school year ended, and I spent most of my waking hours working with my two younger brothers at a frozen yogurt stand down on the boardwalk. I hated the meat market atmosphere of the beach as much as my brothers did, and we entertained ourselves by poking fun at the customers, most of them ordering their yogurt with "wicked" harsh accents and no concept of tipping. The girls dressed, spoke, and acted like daytime hookers, while the boys wore long denim shorts and baseball caps twisted sideways, walking bare-chested in the streets with live snakes around their necks.

I carried a portable typewriter with me in those days, thinking that I might at any moment begin to peck out a short story or a novella worth the time and effort that it would take me to finish it. I worked the rainy days alone, since no one seemed to want to eat frozen yogurt under the grey summer skies of New Hampshire.

It wasn't raining that night, but I was alone anyway. I sat at the counter, ticking away on that portable typewriter, but it wasn't a story I was writing. It was a letter to a dark-haired, dark-eyed, beautiful Latin girl whose face I couldn't pry loose from my memory. I was promising to pay South America a visit at the end of summer, a visit that I hoped would turn into a residency.

"Hi!" The sound of her voice startled me, then rippled through every one of my senses.

I looked up to see that young blonde coed with cheerleader good looks and ill-deserved popularity standing on the customer side of the counter. She was wearing a red tee shirt that brought out the pink in her cheeks.

My mouth followed suit with my eyes, widening in surprise mixed with fear. It took me a moment to respond, and a conversation that I don't fully recall ensued. I don't recall what we talked about, other than the fact that it was a short, sweet, and light conversation. I do remember that as she spoke she smiled, and that I couldn't help but marvel at her kindness. She was not the least bit frightening.

A few nights later, however, I saw her with another man. A man wearing blue jeans, loafers, and a white belt. A white belt on a date. At the beach.

"Matthew, if she'll go out with him, she'll definitely go out with you!" My brothers encouraged.

She sauntered over to the yogurt stand in the middle of her date, leaving Mr. White Belt across the boardwalk at the Taco Hut, where I hoped he was ordering something spicy and disastrous. I held my breath and lost my cool as she walked over.

"Hey, how's your date going?" I asked in a blur of words, each one of them dipped in the hot salsa of mockery.

"Look, I had nothing else to do tonight," she said, and made to walk away.

I took a step back, feeling stupid, my future in South America looking that much more certain.

But she wasn't finished. She spun around and came halfway over the counter, her face as close to mine as the laws of space, time, matter, and physics would allow.

"Besides," she said in a loud voice, "no one else asked me!" Her face was alight with that disarming smile, and her normally pink cheeks flushed red.

Ever the numb and the void when it came to witty retorts to words spoken by pretty girls, I stood there and watched as she turned around and made her way back to Mr. White Belt.

"Matthew..." my brothers chimed together, their own mouths open in disbelief.

"You think?" I mewed, doubt backfilling the space she had left behind.

It took some time, a lot of courage, and a little sister physically pushing me down the boardwalk to the little shop where the blonde with cheerleader good looks worked, but I did eventually ask Elizabeth out on a date.

We went to the aquarium in Boston. She drove her dad's minivan, keeping her right hand on the wheel and her left foot on the dash. The rip in her jeans let the soft skin of her knee show through.

Less than a year after I hated her, I married her. Forever. 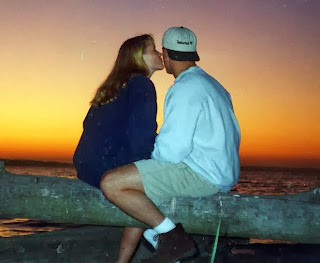 The rest is our history. It's rocky, sharp, and fevered, but also funny, romantic, passionate, and crazy. I'll write it all down one day when the kids are older and can understand what love is, and can forgive their parents for everything they did to each other. And then love them even more for sticking it out.

Maybe I'll use a portable typewriter.