Hand Me Ups and Downs 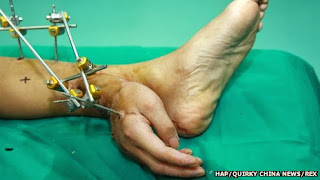 While I am fascinated, impressed, and even frightened by this news story, I can't help but think of the everyday applications. Let's start with how much easier it would be to scratch your foot if your hand was already down there, and then we’ll move on to the obvious places that need discreet attention at inopportune moments throughout the day. I am pretty certain that if there were a hand growing out of your face, no one would notice should you pick your nose, because they would be distracted by the fact that there is a hand growing out of your face. This leads of course, to the butt; a strategically located hand would allow covert scratching at any time, say for example, in church, while receiving an award, standing in a wedding reception line, or being arrested on network television.

I could go there, and I will: an extra hand grafted to the groin. Think about it: men around the world would finally be able to slump on the couch and watch football without their wives telling them to pull their hand out of their pants. But honey, if you want my hand out of my pants, I’m going to have to take my pants off!

Additional areas of life that would change dramatically, where having extra hands grafted onto the body become an elective surgery (eventually covered by Obamacare, of course).

Sex! (I leave the rest of that one up to your own imagination/perversion, only because my thoughts are too many to insert here.)

Not only would this change the way we scratch and screw, but it would also affect the way we play sports. Goalkeepers would choose to have hands grafted onto their shoulders, waists, and thighs to increase their stopping ability. Wide receivers playing American football would attach hands to their hands, increasing their chances at catching and hanging on to the ball, while running backs would move their hands down to their groin area, preventing defensive players from stripping the ball away (because no one wants to be seen groping another man’s privates out on the gridiron). Fencing, with the addition of extra foils (and the potential for blood), would become the most watched sport during the Summer Olympics, while wrestling would be banned for the disturbing and non-consensual holds that would occur out on the mat.

The guy from Cheap Trick would finally be able to play that double-necked guitar he has been carrying around all these years.

The criminal system would spawn the stuff of Kafka stories, as judges would begin to sentence criminals to hand-relocation surgeries. Thieves would have their hands put high up on their shoulder blades, rendering them all but useless in the practice of their craft. Empty the cash register and stuff the money into my fanny-pack or I’ll shoot in your general direction! Those found guilty of assault would be sentenced to have their hands attached to the sides of their head, making the throwing of a decent punch impossible, and if stubborn or angry enough to try, they would only cause themselves serious neck injuries. Anyone found guilty of a sex crime would have their hands grafted to their buttocks, which would seem like a reward for a few minutes, until their hands fell asleep and the realization that they will be sitting on numb, sensory-deprived hands for the rest of their lives set in.

Political speeches would be outlawed as a safety precaution, after several Howard Dean “yaw!” like moments ended in concussion. Politicians would also find it easier to plunder taxpayers, however, not just because they would be able to shake constituents hands while simultaneously pick-pocketing them, but because they would be able to cross their extra fingers behind their backs while promising lower taxes and financial security if voted into office. Bill Clinton’s extra hand would wipe away a single tear that threatens to drop down to his bottom (and bitten) lip as he shakes his head and wonders at what it would have been like to serve as both full-time President and pervert at the same time, Barbara Bush would come home to the ranch after shopping and find George in the living room, waving an extra pair of “thumbs up” high into the air, a paper banner with the words “Mission Accomplished” scrawled across it in crayon hanging above him.

Clapping would have to be banned due to the high number of burst eardrums at concerts, theaters, and elementary school plays.

Clothing designers would enjoy an influx of business for the first several months of hand-grafting, due to the demand for extra-hand accommodating fashions, but in time the stress of constant work under such demanding conditions would send them spiraling into depression. Worldwide charitable donations would flood in, providing each designer with an extra hand that would pat them on the back and bolster their self-worth enough to get them designing again.

All in all, the world would be a better place with extra hands. There would be so many hands, enough to make light work of the world’s issues. Homelessness would end (more hands for building), hunger would become a distant memory (so many hands for planting crops), and confident high-tens would replace awkward, limp, clammy handshakes between world leaders, essentially ending war.

Of course, we will have to be careful. With extra hands will come extra responsibility; just because we can does not mean that we should play with our phones while driving But Officer, I had two hands on the wheel!


Until, of course, the day comes that science Apple develops the iGraft, giving us four eyes; two for driving and two for texting.
Posted by Matthew Deane