Frog and Toad are Friends

This is not a eulogy. (Thank God.)

One of my favorite series of books as a child was the “Frog and Toad” series by Arnold Lobel. The tales of the two amphibious friends that couldn’t have been more different from each other hold a special place in my memories of childhood. The one tall and calm and capable, the other short and intense and unsure, the two balanced each other out, making for good times and a lasting friendship. 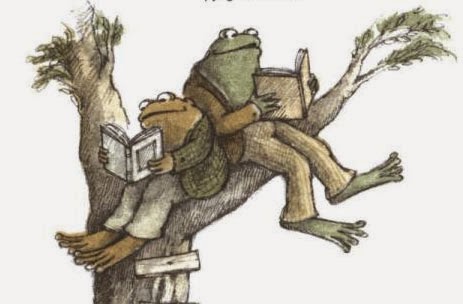 In one of their adventures, Frog and Toad read a book about knights in shining armor fighting dragons. The pair begins to wonder if they are as brave as the knights in the book. They look in a mirror and decide that they do indeed look brave, but they decide to climb a nearby mountain together as proof. Along the trail to bravery, they escape a deadly avalanche, avoid being eaten by a snake, and are forced to flee from a hungry hawk. In the end they run home and hide, deciding that they are both brave enough just as they are.

I am not skilled with a hammer. When using a screwdriver, my tongue sticks out in concentration, and in my head I hear the chanting rhyme righty-tighty, lefty-loosey repeated over and over until the task is complete. I’ve never cut a straight line through a piece of wood, I can’t unclog a toilet without soaking myself in poo-water, and the only finish work I am good at is not an appropriate topic for open discussion. The closest I can get to being a handy type of man is bending over and showing some butt-crack.

In addition to being little better than useless when it comes to fixing things, I am not at all brave, sure, or tough. Yes, I shoot guns, I can start a fire with one match, and at the age of forty-one I ran a marathon with very little training (okay, no training, because I was lazy), but I lost a lot of fights as a kid, snakes still bring out the little girl in me, and the only car chase I’ve ever been involved in was when some local teenagers wouldn’t stop harassing us with toilet paper and window peeping.

Also worthy of note is the fact that I’ve never been given a cool nickname. My nieces and nephews used to call me “Bruiser,” but that was probably because they saw me trip over a shadow and cry at the resulting black and blue marks. The name didn’t stick long enough to count anyway.

I am not sure if all of the above makes me Frog or Toad, but it does make me in need of a good friend, a friend that will balance my shortcomings and find strength in my weakness.

To start, he has a great nickname (no one will ever call me Captain).

Captain Rob can swing a hammer with precision and purpose, he cuts a straight line every time, and his tongue stays hidden inside his mouth whenever he’s doing any of the many great and powerful things that great and powerful men can do. He plays a convincing pirate, can pilot anything on wheels or water, and grows a real beard faster than I can turn a corner running.

Rob is everything that I am not and more. He is also a lot of what I aspire to be but will never become.

When Rob is around, I am at my bravest, coolest, and most capable. In his company I’ve steered a big boat (well, it was big for me), climbed a couple of mountains, and been chased by a hurricane. I’ve been twenty fathoms under the sea, played with seals in the whitecaps around the Isles of Shoals, and squealed with delight through my scuba mask as I’ve witnessed the rippling colors of a squid in the dark and frigid water on a winter night. I’ve driven a convertible down to Key West, sped across a frozen lake on a snowmobile, and been to more than one Guster concert. Together we’ve camped on a lighthouse island, crossed over to the wrong side of the tracks in the middle of the night, and spent the night with the Swedish Ladies Hiking Team atop Mount Chocurua in the White Mountains. 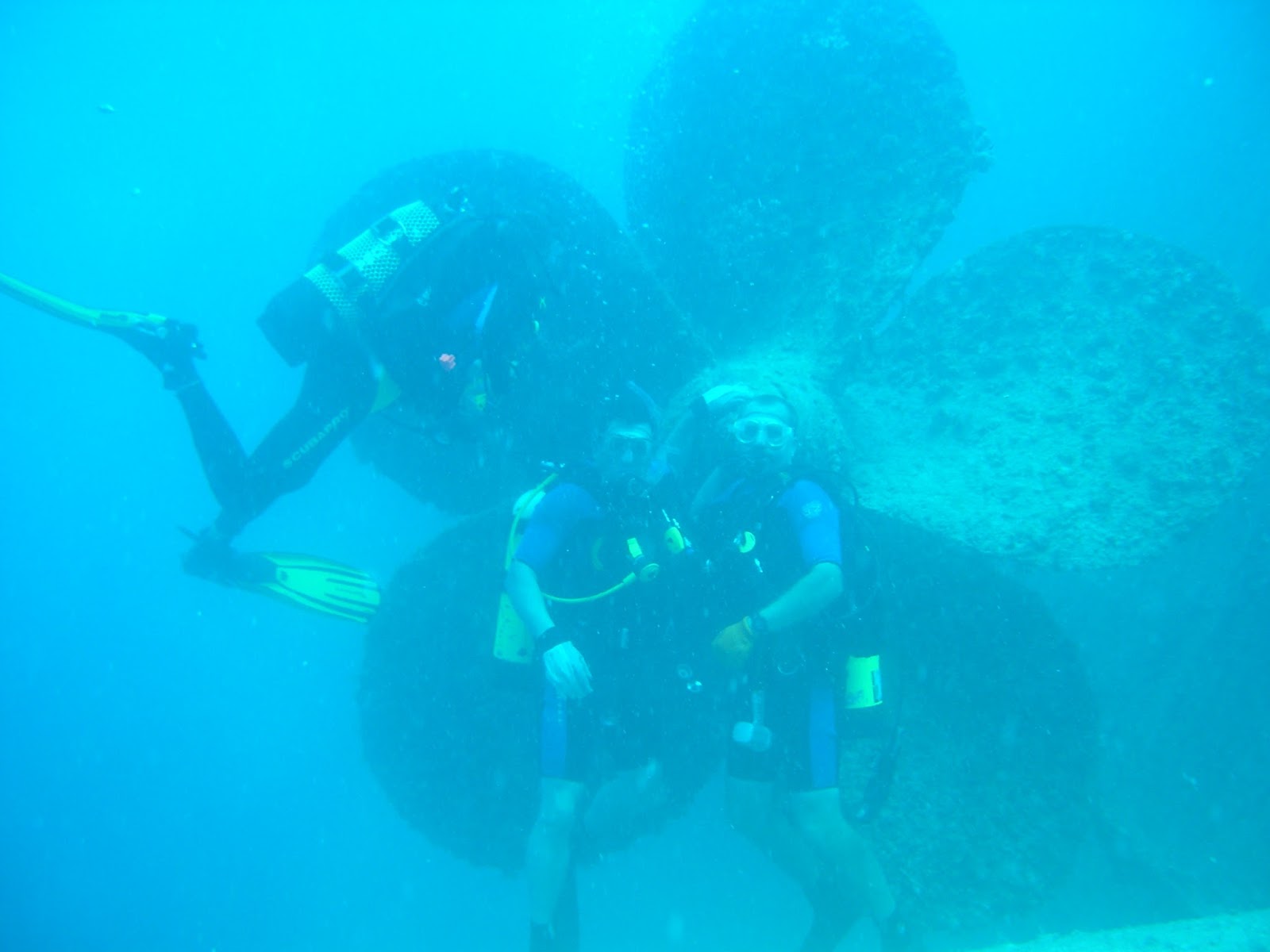 But…While in The Captain’s company, I’ve hammered dimples into a lot of wood, thrown up a gut full of banana milk and chocolate donuts into the sea, unwittingly walked through the middle of a transvestite gathering in a hotel bar, and proven myself useless on more than one manly project. I’ve wounded myself with power tools, grimaced and whined at the burden of hard labor, tripped over extension cords, and handed over the wrong wrench on more than one occasion.

Although I have felt inadequate in the presence of many men, around Rob I don’t feel any sort of need to measure up. Instead, I feel a distinct and pleasant need to be myself. Our relationship grew strong not because we share interests, talents, and experience, but rather because of our differences in what we bring to the table of friendship. Rob makes it comfortable for me to be me, a favor that I try to return. Even when he calls me “Sally,” I hear an amused affection in Rob’s voice. 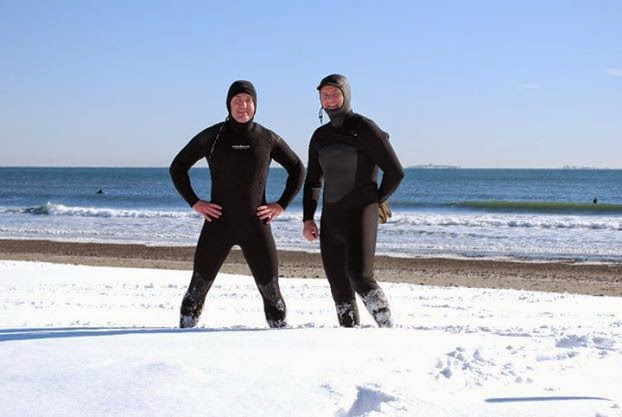 For all his muscles and grit, Rob is, on the inside, stuffed with cotton candy. I once watched him sit patiently for well over an hour as my young daughter carefully painted each of his nails in bright shades of pink and purple, coated his face with cheeky blush, and filled his hair with clips and ribbons. He has carried each of my sleeping children in his arms, and shouldered them while trick or treating on more than one Halloween night (dressed each time as a pirate, of course). He has played their games, traded jokes and tickles with them, and spoiled them with unexpected presents and sweets. He will forever be their favorite captain.

Rob’s heart is bigger than his chest. At the lowest point of my life, when I felt that I couldn’t go on in the wake of my brother’s death, Rob spent hours at my side. Much of that time was spent installing the wood flooring that Elizabeth and I had ambitiously purchased without much thought to its installation. His craftsmanship was indeed an appreciated service, but the humble hours spent together on our back deck one day after lunch was a godsend for Elizabeth and me. Rob listened quietly as we poured our grief, confusion, and despair at his feet. After taking it all in, he shared his own heartbreaking experience, the sudden loss of his brother Ricky years earlier. With a wounded voice, he shared all that he had felt and learned from a moment in time that will never leave him. Covered in sawdust and tears, Rob bore our burden with us, and mourned with us as we mourned. I loved him even more for that.

Knowing Rob like I do, he would shake off my sincere expression of love, appreciation, and praise as nothing more than the sensitive fabrication of his dear friend “Sally.”

And that is Rob to anyone that knows him. He is a man without guile that carries within him a bare-chested spirit, because he has a habit of giving the shirt off his back to someone in need.

Earlier this week, my good friend Captain Rob posted a photo of the tugboat on which he serves as first mate. The caption read “Outbound from Cape May northbound. Hope this thing makes it!” I have seen Rob post photos from his floating office many times over the past few years, but this one gave me a few moments of pause. I know that Rob is a capable, brave, and experienced seaman, one that doesn’t throw such comments about without cause. The business of my day eventually pushed the foreboding feeling to a dark corner of my mind, and in time it was forgotten.

Two days later, at an ungodly hour, an incoming text vibrated me out of a deep sleep. Pulled from the darkness of dreams into the bright light of technology (and without my glasses), I could barely make out the sender’s name. It had come from Neil, a good friend to both Rob and myself.

Why would Neil text me at this hour? My birthday has come and gone. It isn’t Christmas, and there is nothing special about today.

I dropped the phone and rolled back into the warm cocoon of blankets, unwilling to don my glasses and read the message that was sure to be bad news about Captain Rob. I stared into the darkness, listening to Elizabeth breathing softly beside me. My phone rested a million miles away on the nightstand as I tried not to envision a world without my dear friend living in it.

How would I ever be brave again?

Many minutes and a very hot shower later, I summoned the dregs of my courage and picked up my phone to read Neil’s text.

Rob’s tug sank in a storm off the coast of Rhode Island. Rob and the crew had no time to pull on their emergency suits, only life vests.

My knees buckled; I fell back and sat on the edge of the tub, bile rising within my throat.

They were rescued by a fishing boat. (Hey Neil, next time start with the good news.)

My head felt light with relief, and a smile spread its way across my face. Rob’s phone was most likely at the bottom of the ocean, but I called and left him a voicemail anyway, wanting him to eventually share in the joy I was feeling to know that he was alive. 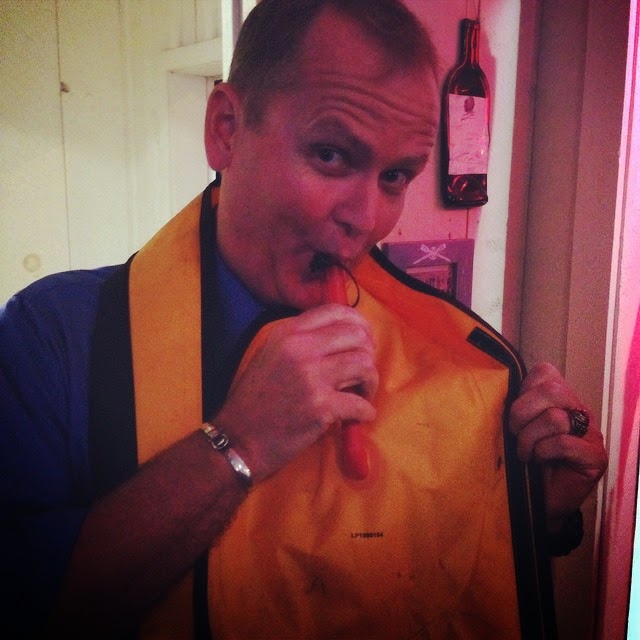 Thanks to a wise and wonderful wife, I was soon on a plane heading east to surprise my friend with an unannounced crashing of his “Man Overboard” party. It was an absolute adrenaline rush, to throw my arms around my dear friend and tell him that I love him. To see him standing before me, dressed in the lifejacket that had kept him afloat, laughing, smiling, and living, struck me as a blessing from heaven, one that filled me with happiness to bursting.

Rob told me the harrowing tale of the sinking, and how within a span of just a few minutes he and the crew went from marveling at the pounding waves to swimming for their lives in them, wondering if rescue would arrive.

Later, during a quiet moment together, I asked the bravest man I know, “Were you scared?”

“You know Matt, I’ve never been more scared in my life,” Rob answered in a serious, my-life-course-has-been-forever-altered tone.

And in that moment, I decided that Rob and I are brave enough just as we are.

Love you Toad. (Or am I Toad?)
Posted by Matthew Deane